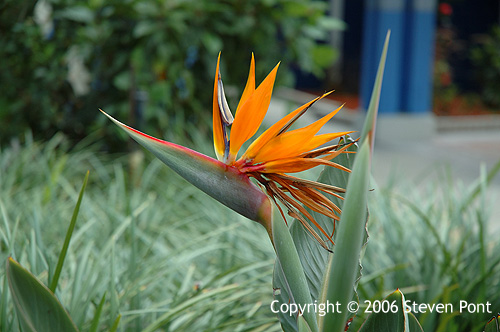 I know there are some people who don't agree that the theory of evolution goes a long way toward explaining how humans arrived in the year 2006. I don't want to be rude about it, well, actually, it's my blog so I can be as rude as I want. You're all a bunch of friggin' idiots. There. I feel better now.

(For the sake of completeness, the above referenced situation in Pennsylvania has since been resolved and the idiots have been deposed. Personally, I'm going to be a Pastafarian.)

I sometimes wonder how evolution can explain certain things -- like this flower for example. What kinds of evolutionary forces would cause a plant to produce a flower that looks like a bird? Most plants need to be pollinated by insects, and if I am not mistaken, most insects crawl/run/fly in the opposite direction when they see a bird. On the surface, that would seem to be bad for "perpetuating the species". Maybe somebody can enlighten me.