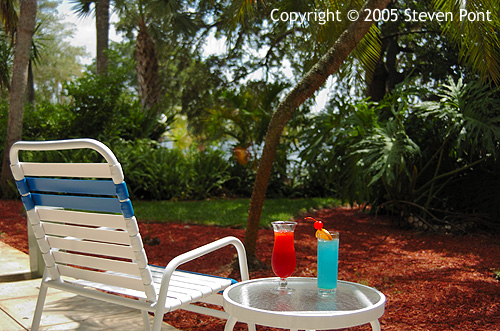 These pictures of fancy bar drinks are starting to be a "thing" with me. For The Martini and Martini Reloaded, I actually asked the bartender a "pretty drink". I wasn't sure if there was a better way to get an aesthetically pleasing drink while still retaining my macho persona. Maybe I should have just sauntered up to the bartender and in my best Brooklyn wiseguy accent said, "How you doin' doll? How's about a Cosmopolitan or maybe a Pink Lady?"

Tiptoe Through the Tulips 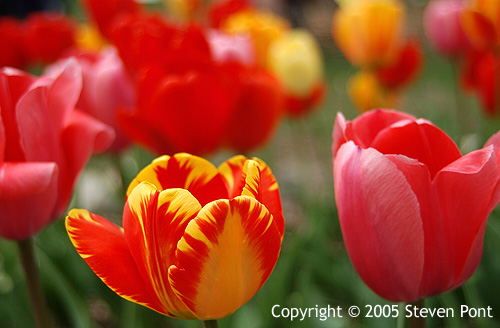 Speaking of tulips, I don't remember much about Tiny Tim, seeing as how his popularity peaked in the 60's and I was busy being born about then. However, I do remember a vague feeling of uneasiness when watching him perform. There was just something unsettling about a very large man with a very small ukulele singing in a very high, quivery voice. Everything you ever wanted to know about Tiny Tim (including some very scary photographs) can be found at www.tinytim.org. 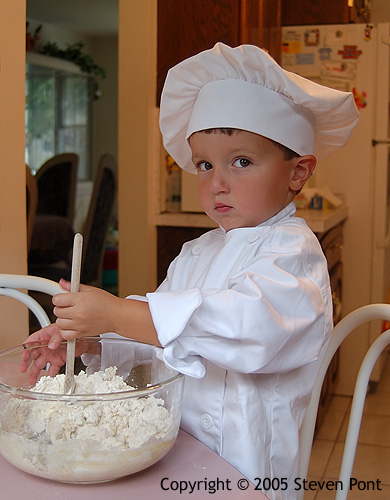 We will have none of this "smile for the camera while pretending to stir the ingredients so I can take a cute picture" stuff. Not in my kitchen. I like my helpers to be as serious about making the food as they are about eating it.

Michael does look really cute in that chef's outfit, but that's just a fringe benefit.
No comments:

Ladies and Gentlemen, the all-new 1962 Corvette 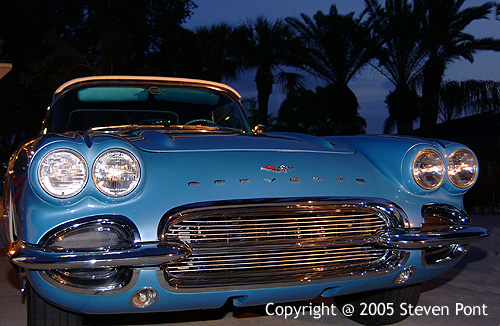 A lot of people (mostly male-type people) spend a lot of time involved in the details of cars and their engines. Everything I know about cars I learned from the Beach Boys and Bruce Springsteen. I know that Bruce has a '69 Chevy with a 396, Fuelie heads and Hurst on the floor, but I couldn't begin to tell you what any of that means. Oh well, at least it's purty to look at. 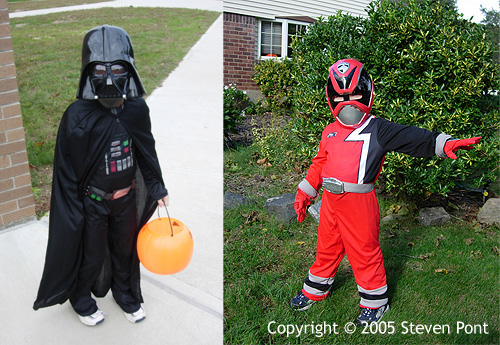 If you didn't get to see my boys in person, here they are in their Halloween costumes -- Darth Midget and The Red Power Ranger. Darth Vader was the most popular costume this year, as you can see from this photo (none of those kids is Michael, by the way). There were no fewer than a dozen Evil Lords of the Sith at the Halloween parade at Michael's school. (There were probably a lot more than a dozen; I lost count.) It's just too easy now to run out and buy some crummy costume that will look more authentic than anything you can make at home.

Back in the olden days, I don't remember running to the store to buy a new costume every year. (That doesn't mean it didn't happen, but I have a very bad memory, so I'm just assuming here.) I remember being a clown for a few years and a pumpkin for a few years after that. One of the few "home made" costumes I saw yesterday was one kid who was wearing a big square box. He was dressed up as a television. That was one of the best costumes I saw all day. I'm sure the kid was mumbling something about "stupid parents" and "why can't I be a Power Ranger like all the other kids" while he was trick-or-treating, but I certainly enjoyed his costume.

Next up on the iPont rant, how today's Halloween candy sucks.
1 comment: