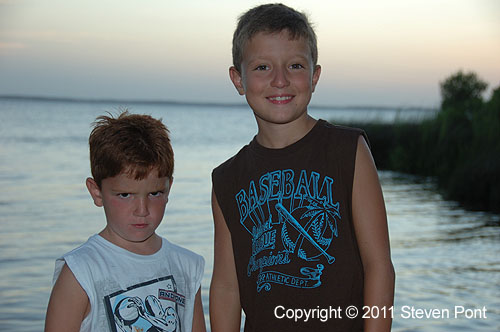 Let's play a game and imagine what happened about 8 seconds before this picture was taken. Almost everyone can play because almost everyone has a picture like this. Well, anyone who has a sibling does.

The obvious possibilities:
Boy is the older brother going to be sorry when the younger brother turns out to be bigger than he is.  And takes up wrestling.  And gets all of the girlfriends.

It's funny how you have no idea of the scale of some things. The Space Shuttles fall into this category. You know intellectually that a rocket is a pretty big thing, but you don't really appreciate the size until you stand next to one.

Douglas Adams (of The Hitchhiker's Guide to the Galaxy fame) said it best:

Space is big. You just won't believe how vastly, hugely, mind-bogglingly big it is. I mean, you may think it's a long way down the road to the chemist's, but that's just peanuts to space.