Hershey and the Chocolate Factory 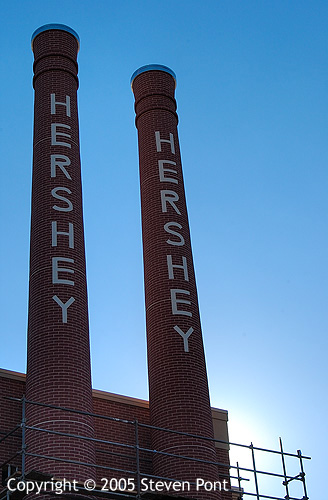 I saw Charlie and the Chocolate Factory this weekend. I'm not much good for movie reviews because my brain has a roughly fifteen-minute time limit. This means that by the time the end of the movie arrives, I have probably forgotten a good portion of the beginning of the movie. This movie was a little easier to analyze, though, because I'm very familiar with this story's last big-screen incarnation, Willie Wonka & the Chocolate Factory.

Despite all of the new whiz-bang special effects that make the new Willie Wonka into such a magician, I have to say that I enjoyed Gene Wilder's Willie Wonka much more. His portrayal of Willie Wonka was much less creepy and the accompanying cast of obnoxious kids was better at being, for lack of a better term, "naturally obnoxious". The kids in the 1971 movie seemed more believable, even as they were being supremely annoying and self-centered. They were fun to watch and it was fun watching them get their just deserts. The kids in the new movie were just stereotypically annoying, and not in an entertaining way. My reaction after the last of them was dispensed with was something along the lines of, "Oh good, now we can move on with the rest of the movie." One thing that I found strange was how much some of the kids in the new movie looked like their counterparts from the older version. Specifically Veruca Salt (old new), Mike Teevee (old new), and Augustus Gloop (old new). I assume that both versions of the movie were cast based on the book by Roald Dahl, but the resemblances were still uncanny.

Two parts of the movie that I could have done without were the Oompa Loompa production numbers and the squirrel attack. The Oompa Loompas in the 1971 version were a little too preachy, but in the 2005 version, I was almost as eager to get rid of the Oompa Loompas as I was to get rid of Charlie's competitors. The squirrel attack, well, I guess that's my own fault. I was worried that my three-year-old son who loves animals was going to have some kind of mental trauma after watching a bunch of cute, cuddly squirrels hoist a girl on their collective shoulders and throw her down the garbage chute. I guess that's what you get for taking a three-year-old to a PG movie. I didn't properly Parentally Guide.